Home » Dying of Cancer: My Mom Died A Slow Death

Dying of Cancer: My Mom Died A Slow Death

My mom was one of those women who seemed to know everyone. She honestly wanted to connect with other people, to build and nourish communities around her. She laughed a lot, held doors for strangers, planted more flowers than most greenhouses, and never forgot a birthday or anniversary.

Beautiful Inside And Out

And I know this shouldn’t matter, but my mom was beautiful. She was beautiful in all of those dreamy and intangible ways that all moms are, but she was also just really pretty. Once, after a few drinks, a friend of mine told me he’d always thought my mom was “super-hot.” That might sound a little strange to you, but to me, it was just a funny little reminder that my mom was indeed still looking good, even as she approached 50.

Grew Into A Strong, Beautiful Woman

My mom, who never felt pretty or worthy or smart as a child or young woman, had finally come into herself later in life. She went out of her way to be kind, try new things, and continue to learn and grow every day. She and my dad were a two-person team that could and did take on the world.

All of this is why watching cancer take hold of her was devastating in so many ways.

It’s pretty common knowledge that chemo makes you lose your hair. So we were sad, but prepared as mom’s beautiful blonde locks started to come out in clumps. I can’t remember who suggested it, but we had a head shaving party. Mom’s best friend Shirley and my best friend Alice came over to celebrate and support Mom as we buzzed off what was left of her hair.

I remember Mom crying as we finished, even though she tried so hard not to. I cried too, not realizing that this was the first of many pieces of my mom that would slip away. We tried to have fun when we went wig shopping, and she humored Dad and me by trying on a few racy and brightly-colored styles. But, we all knew we were there because she was sick, because things were not going the way we had hoped.

What many people don’t know about chemo is that it can also make you lose your short term memory. My mom had a stem cell transplant, which involved abnormally heavy doses of chemo, so her body and brain had to take an incredible beating. There’s a name for what happened to her: “chemo brain.” Doctors actually use that term to describe it. It almost sounds funny, except that it isn’t at all.

Mom would walk into the living room, and forget what she had wanted in there. She wasn’t cooking anymore, since she was so weak, which was a blessing in disguise. With no recollection of what she’d done moments before, she could easily have forgotten that the stove was on, and burned the house down. She started keeping tiny notepads on end tables, in the car, in her purse, so she could write things down before they slipped away. Learning new things was out of the question at this point. Mom, who once had a sharper memory than any of us, couldn’t remember to brush her teeth without one of us reminding her.

When it came back for what seemed like the tenth time, cancer played the cruelest trick of all.

It stole my mom’s beauty.

She had to have surgery to remove yet another tumor that was wrapped neatly around her brainstem. When I was able to see her in the recovery room, I almost couldn’t believe that was my mom. Her whole face was swollen in a way that seemed unnatural. Her head was misshapen from the surgery, and was bandaged like a zombie. After that surgery, her eyes never looked quite the same, like it was hard to get one of them to open with the other. And her face remained swollen, as a constant reminder that my beautiful and brave Mom had been through things that people are not supposed to go through.

When Mom was really sick, I would help her take baths. It may sound like a sweet mother-daughter event, this trading of places, and in some ways, it was. But, it was also awful to know that my mom, who used to braid my hair, spend hours in her garden, and make my Halloween costumes, couldn’t even hold a washcloth.

My brother Aaron had cared for her 24 hours a day for months while she was undergoing treatment at Duke, and I still can’t bring myself to think of what that must have been like for him, watching Mom grow so weak and so small each day.

And if that is unthinkable to me, what our dad went through goes somehow a step farther. Mom, who had been his wife, his partner, and the mother to his children, was now someone who needed his complete care. The woman who chaperoned countless school field trips, went back to college when she was 40, and watched Cirque de Soleil in San Francisco was now reduced to a woman who had cancer, then didn’t, then did, over and over and over again.

Suggested Read: Coping With The Death Of A Spouse

When Mom was first diagnosed, she was given just a short time to live. With some amazing doctors, we got four more years. I take comfort in knowing that in that time, we all had a chance to have every conversation we needed to have with mom, and to say goodbye exactly the way we wanted to.

I’ve met countless people who have told me how much they wish they’d had “a little more time” before their loved one died. I understand that, and my heart goes out to them, but with my time came some things that I am sad and ashamed to admit. Like the fact that when I think of my mom, I can usually only picture her in the last few years, when she looked like “cancer mom” instead of the mom I grew up with.

Dying Of Cancer- Losing her Slowly and Grieving the Whole Time

It’s a terrible thing when someone you love dies slowly, losing little bits of themselves along the way. And it is a terrible thing to have those memories taking up the space that should be filled with birthday parties, family gatherings, and humorously ill-constructed science fair projects. In the years that mom was sick I lost her piece by piece, little by little, until the final loss.

I didn’t realize it then, but I can see now that I was grieving the whole time, learning to live with each new loss. I guess you could say it gave me a chance to slowly come to terms with the fact that mom would be dying, and that I had the opportunity to use what time we had left wisely.

But if I were to be honest, I would say that sometimes I feel cheated. I feel angry that my lingering memories of my mom are sick, bald, and forgetful. I feel sad to think that my dad and Aaron had to transition from husband and son to nurse and caretaker. And, I am baffled by a God or universe that would allow my mom to be sick for so many years, to fight so hard, and still die in the end.

There’s no Good Way to Lose Someone You Love

Many people question if it is easier to lose someone quickly or slowly. That is a question that I wouldn’t be able to speak to, because there’s no good way to lose someone you love. What I am thankful for, is the many magical moments Mom shared with me, Dad, Aaron, and everyone else in those final years. I am beyond grateful to have had the chance to tell her how much I loved her, how much her life had meant, and how much I saw of her in me. But still, having her be sick for so long took a toll on me, on everyone, and I can’t pretend that it didn’t change us all.

In the end, I have to hope that it changed us for the better, made us more aware of each moment we have with the people in our lives. And on a good day, on most days, I believe that it has, because Mom would have believed that. She always saw the possibilities in every challenge, and I see that in myself. In the end, when cancer had slowly stolen so many pieces of her, that was something it could not take, something so strong that it outlived even her.

Suggested Read: Life Is Too Short: Go After The Things That Matter Most

A Poem About Grief And Healing: I See You, Being There Is Important

What Does Grief Feel Like? 4 Comparisons To Explain Your Grief And Loss 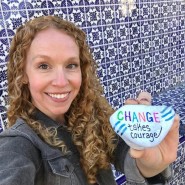 After experiencing the deaths of many family members, Alisha lost her mother to breast cancer in 2007. For many years, she worked with children and families who had experienced a loss. She holds a BS in Behavioral Health, with her studies focused on abnormal psychology and trauma counseling techniques. Alisha currently works for Everdays, the world's premier death notification service, allowing families to reach the people they love in the moments that matter most. Alisha is a prolific writer and enjoys helping people to dream, design, and build their most fulfilling lives.

Surviving The Funeral Of An Addict

After a Loss, Let Nature Help You Cope

Moving Forward After Loss — Adjusting To The New Normal